The prodigal returns after too long a break. The last two weeks I have spent with my nephew Christopher, who was visiting this sceptred isle from his current home, the (former) Benedictine mission at Kalumburu, in the remote, vast and priest-starved diocese of Broome in north Western Australia (for which he has been accepted as a seminarian). Apart from visits to London, Lincoln and Bury St Edmunds, we went to Leuven, Cologne and Rome. It was a great privilege to be able to celebrate Mass with him at the cathedral in Cologne, as well as St Paul’s outside the Walls and St Peter’s in Rome.

And it is the Mass that has my attention at the moment. Tomorrow I am off to Folkestone to talk to the deanery about the revised Missal. At Pentecost the Missal began to be used in Australia, liturgically a rather liberal region. The militant National Council of Priests in particular has been scathing about the Missal. So loins were girded to read the responses as they came to light.

Lo and behold, the feedback seems to be positive. The Missal works. In the national newspaper The Australian an article records the reactions of a newly ordained 24-year old priest in Sydney and a 82-year old priest in Brisbane ordained in 1955, and still a parish priest. Both of them find in the revised Missal a stronger sense of the sacred and an enhanced emphasis on divine worship. The National Council of Priests is still unhappy, seemingly because no one asked them to help prepare the new Missal.

Even more startling, and indeed heart-warming, was a piece by a Missionary of the Sacred Heart, 47 years a priest and currently serving the Church as parish priest on remote Thursday Island, off the northern coast of Queensland, Australia. He is no acerbic conservative. For Fr Laurie Bissett MSC, the new Missal was something he approached with trepidation, especially in light of all the doom-saying. Instead he has found in the revised Missal the reward for all his years labouring in the Lord’s vineyard, often discouraged and stressed. But now he can say: “at last I am reborn“!

Please do read the article. It is not an academic piece but a sharing from the heart of his joyful experience using the new Missal in his remote community. His reactions are all what some of us have predicted: the Missal has liberated him from the feeling that he is star of the show, from having,

to be spontaneous, inventive, smart, funny, daring and all the time dreading I would not be loved, understood, admired and thought of as innovative and creative… the effort nearly killed me.

All the fears that had been whipped up about the Missal he has found unwarranted. But even more, it is not a case of the Missal being only “not bad”; instead,

I feel my spirit soar and I hear the congregation answering with fervour and gusto. THEY like it (I have 5 Church Communities of mixed Aussie, Aboriginal, Torres Strait, Filipino, Chinese, English, Irish, Polish).

He realised that for years his celebration of Mass had become a matter of rote recitation, not engaging his heart:

It lacked something. And now I know what it is; the Masses lacked God, reverence, awe, beauty, mystery, and humility. At last I feel humble as I pray. At last it is not about me but about God. At last I am praying the Mass not ‘saying’ it; at last I have been reborn!!

Fr Laurie Bissett MSC is an inspiring man. He has not let years of sometimes (seemingly!) routine pastoral labour close his mind or his spirit. Instead he has been renewed in his ministry by the new Missal. His experience reminds us that the Holy Spirit always works within the Church, never against it.  May the Lord continue to bless Fr Bissett and his people.

Fr Bissett has me excited. The revised Missal – bring it on! 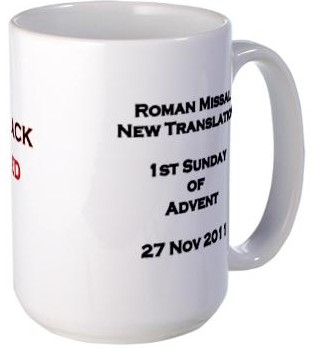 P.S. Soon there will be a series of posts here about aspects of the revised Missal as an aid to our preparation for its implementation. Hopefully the series will complement and not duplicate the excellent work of others.

13 thoughts on “The new Missal works! Who would have thought it…”