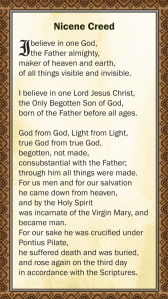 This is probably the most controversial change in the Creed, even more than the oft-maligned and usually misunderstood change back to “I believe” at its beginning (which is the subject of Missal Moments I). No links will be given to critiques online, firstly because the more coherent ones usually complain mainly that the change is bad English, and secondly because many critiques themselves, or more often the comments attached by others to them, ending up being rants of the most unhelpful kind, all heat and little light.

In fact, when one has pruned away the excess of polemic and hyperbole in most critiques, the criticisms seem mainly to consist of three principal objections:

So while the word “consubstantial” might not win prizes in a linguistic beauty parade, it is nevertheless an accurate translation of the Latin and a precise theological term that accurately expresses a fundamental and indispensable truth that we should all know and be familiar with. If the word causes us to search for our Catechism or ask a priest or theologian what it means then surely that is no bad thing. Our faith would have been deepened and strengthened in that very normal and human process. Perhaps some might discover that they did not know this teaching quite as well as they thought they did.
As a general principle perhaps we should be humble enough to accept that, perhaps, if we do not understand an aspect of the teaching of the Church, then the problem not with the teaching but with us. Such humility can only be faith-building and enriching.
51.409572 -1.171802

4 thoughts on “Missal Moments VII: “… consubstantial with the Father…””